The Sierra Nevada de Santa Marta , in a mountainous system, considered the highest in the world by the sea , since its highest snow-capped peaks (the Cristóbal Colon and Simón Bolívar peaks) reach 5775 meters above sea level.

UNESCO declared it Biosphere Reserve and World Heritage Site , in 1979. This mountain in Colombia has all the thermal levels, from the warmest at sea level to the coldest in the snow-capped mountains.

All its basins are characterized by their immense beauty and natural exuberance, being the only coastline in the world where there are mountains and snow-capped mountains so close to the sea, thus offering all climates and a wonderful wealth of biodiversity , ecosystems, hydrography, fauna, flora and most importantly its indigenous communities that protect and care for mother nature with an authority.

Currently the Sierra Nevada de Santa Marta in Colombia It is a destination inhabited and cared for by more than 30,000 indigenous people direct descendants of the ancient Tayronas , included between the Kogui, Wiwa, Arhuacos and Kankuamos ethnic groups, cultures that still conserve sustainable customs and traditions.

That is why Indigenous should be the operators tourist in charge of excursions to different destinations and communities natives. They are protectors of mother earth, their sustainable customs transform traditional tourism and make it a Special ecotourism .

It is considered by native indigenous like his home, a territory full of wisdom and nature, each step along its paths is a direct encounter with a natural beauty unique in the world.

The Sierra Nevada de Santa Marta It is the place where the Tayrona Indians lived for more than 500 years known for the legacy of Teyuna, the story tells that Teyuna was the origin of the mother Nature and from heart of the world .

NATIONAL PARKS: • The Sierra Nevada de Santa Marta National Park • Tayrona National Natural Park
ARCHAEOLOGICAL PARKS: • Pueblito Chayrama Archaeological Park
• Teyuna Archaeological Park – Lost City Tayrona
Where is the Sierra Nevada de Santa Marta located – Limits:
• On the North Face it limits with the Caribbean Sea, from the mouth of the Córdoba river in the Magdalena department to the mouth of the Ranchería river in the Guajira department.
• On the Western Face it limits with the Ciénaga Grande de Santa Marta, between the rivers, Río Frío and Río Ariguani.
• On the South Western Face it limits with the extensive valley formed by the rivers, Río Cesar, Río Ranchería and Serranía del Perijá, the arm where the Andes mountain range in Colombia dies. 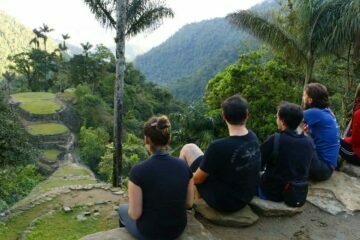 In this Trek to the Lost City Colombia, you will enjoy a unique and fascinating adventure with indigenous guides ✅ You will be part of an ancestral journey through natural trails full of jungle and vegetation.
5 days
7/10 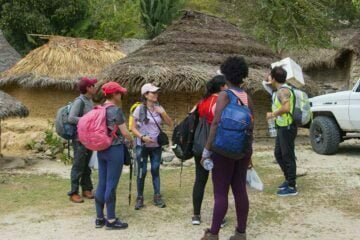 Make an Ecological Trek to the Wiwa Indigenous Community ✅ Travel and Know the Gotsezhy Refuge, Learn about the culture, customs and traditions of an Indigenous Village of the Sierra Nevada de Santa Marta.
2 days
6/10 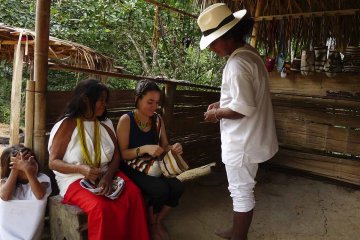 Get to know of the Sierra Nevada de Santa Marta ✅ Gotsezhy Refuge is the perfect plan to interact with the traditions indigenous.
1 day
5/10

How to get to Sierra Nevada de Santa Marta?

If you want to know any of these natural settings with Indigenous Guides, write to us and our advisers will put together the best plan for you.

PHOTOGRAPHS OF TOURISM IN THE SIERRA NEVADA DE SANTA MARTA